Far-off from the rat race of big urban centre, Puduchuerry is a peaceful and quiet place located on the southerly seacoast of India, just 152 km away from the southern metropolis Chennai. Puducherry, once referred as Pondicherry and now fondly called as Pondy is a Union Territory of India (a type of administrative division in the Republic of India) constituted out of four enclosed territory of former French India, which is nothing but the administrations established by the commercial enterprise of French East India Company in India. 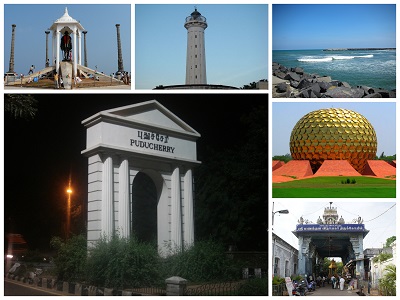 The remarkable French links, greenish avenues, attractively old fashioned colonial inheritance and stretches of exquisite beaches, brands Puducherry as a radically distinctive location that draws thousands of tourists from all over the world. Relish the unearthly scene wearing a spectacle where the glass is made by the French and the frame by the Indians. A wide range of entertainment spots along with the choice of eating houses offering delectable cuisines is sure to make you forget about the routine lifestyle.

Puducherry: Past and Present

The recorded history of Puducherry leads off from the arrival of the colonialist forces which include the French, Dutch, Portuguese and English. Nevertheless, some of the towns located nearby (Bahur, Arikamedu, Kakayanthoppe, Ariyankuppam) which were actually arrogated by the commercial enterprise of French East India Company feature historical reference anteceding the history of colonialist forces. The initial time period of 4th century AD has references concerning to Puducherry being administrated by the famous Pallava Kingdom of Kanchipuram. The proceeding history evidences that Puducherry was commanded by a number of renowned southern dynasties through the following centuries.

After the nation attained independence on August 15th 1947, the then government of India and the French Government came to an agreement to hold polls in French occupied parts to decide their social and political futurity. The day of 1st November 1954 holds significant importance in the history of Puducherry as Pondicherry was reassigned to Republic of India.

The Treaty of Cessation, 1956 states

"The Establishments will keep the benefit of the special administrative status which was in force prior to 1 November 1954. Any constitutional changes in this status which may be made subsequently shall be made after ascertaining the wishes of the people."

During the year1962, under the 14th Amendment of the Indian fundamental law, Puducherry got constituted as a Union Territory to be administrated by the President of India. Puducherry has really come long way, originated as a small fishing village and today the urban centre is regarded as an important port city in the country.

As for as the other Union Territories in the country are concerned, the administrations directly fall under the Central Government of India. Pertaining to the definitions of a typical Union Territory, the governance should be guaranteed by the Central Government by appointing a lieutenant governor or an executive decision maker. Even so, Puducherry is distinctively different in terms of its governance pattern.

At the same time, the administrative abilities of the legislative assembly of Puducherry and its council of ministers are limited to a certain extent as most of the lawmaking conclusions must be appropriated for the consideration and acquiescence of the President of India.
Read more on administration on Puducherry

Tourism in Puducherry is a delicate combination of experimental township, religious sites, which include temples, churches, mosques and ashram,museums, beaches, heritage buildings, monuments and many other entertainment spots. The unusual display of Tamil culture and French culture and the typical cosmopolite scene of Puducherry make it even more fascinating. Altogether, the Union Territory of Puducherry is an important spiritual and cultural centre and a distinguished representative of South India.