Sri Aurobindo Ashram is a renowned and well-off ashram in India, where devotees from India and different parts of the world gather for spiritual salvation. Its spiritual doctrine represents a blend of yoga and modern science. Aurobindo Ashram was established in 1926 by Sri Aurobindo, an Indian freedom fighter, poet, philosopher, and yogi.

Mirra Alfassa, who was born in Paris and recognized as ‘The Mother’; was one of Aurobindo’s followers. She was inspired by Aurobindo’s philosophy and stayed back in Puducherry.  She became the head of the community with Aurobindo’s approval, a position that she held until her death. Under her direction, Aurobindo Ashram grew up from a small group of devotees into a large diversified community with approximately 1300 members.

Sri Aurobindo and Mother are the Ashram's only gurus, even after their lifetime. Aurobindo Ashram does not follow the practice of a Guru succeeding as the spiritual head of the ashram. Aurobindo’s and Mother’s numerous works, comprising of various printed volumes act as guide and inspiration to the devotees. 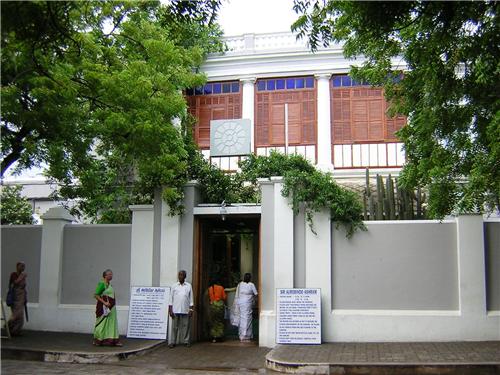 Aurobindo Ashram is an effervescent centre of life in a modern urban background. The vibrant nature of the community reflects the life-affirming endeavor of Sri Aurobindo's Yoga; that work as a contribution to the Divine is a vital aspect of Yoga, and all Ashram devotees perform a certain amount of productive work every day in one or the other Ashram departments.

Devotees reside and work in a large number of buildings spread all over the area. The focus of the community life is the Ashram’s main building, usually called simply "the Ashram”, which consists of an interconnected block of houses, including those in which Sri Aurobindo and the Mother lived for most of their lives. In a tree-shaded courtyard, lies the Samadhi, a white-marble shrine where their bodies are laid to rest.

The Ashram provides its devotees with all the basic needs to lead a decent and healthy life. Various departments have been organized to look after the basic requirements of food, clothing, shelter and medical care. Ashram also has many libraries for learning and amenities for a variety of cultural pursuits.

In the spiritual discipline at the Ashram, there are no enforced practices, no custom, no obligatory meditations or organized instructions in Yoga. Devotees have the freedom to decide on the course and pace of their “sadhana” in accord with their own nature. The universal principle of the “sadhana” is the same for all; work in the Ashram is to be done selflessly, in the spirit of service and as a means of offering or surrendering one’s own self to the Divine; so that it may lead to transform one's self.

Aurobindo Ashram comprises of more than 80 departments which consists of farms, gardens, healthcare, guesthouses and engineering units along with several others. Most of these departments have emerged instinctively, sometimes because of a want for a product or service that wasn't available, frequently because the Mother encouraged a devotee to pursue his interest or art. Underneath her personal guidance, direction and care, these small units soon flourished into well-established departments. While on the exterior they help sustain the Ashram, the actual rationale of these units is to serve as a field for “sadhana”, the spiritual discipline. 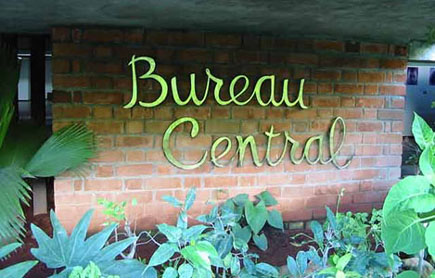 A limited number of rooms are available in the Ashram guest houses, for visitors coming for a short visit. As the rooms are limited and often fully booked, it is advisable to make reservations in advance. If visitors come to the Ashram without a confirmed booking, they can approach the Bureau Central, which provides rooms according to requirements, if accommodation is available.

The Ashram offers accommodation in numerous guest houses located within almost a mile of the main Ashram building. These guest houses are mainly meant for visitors to Sri Aurobindo Ashram. In all the guest houses strict rules of cleanliness and conduct apply. These guest houses are not commercial hotels; there are no telephones or televisions in the rooms, nor any provision for room service. Mostly the gates close at 10.00 p.m. and guests are expected to return by that time.

Most of the guest houses are selective and prefer a personal introduction before giving reservations. Visitors from abroad must be registered at the Government's Foreigners' Registration Office. Three of the guest houses listed below have the necessary authorization to do this registration.

Aurobindo Ashram is open for public on a daily basis between 9 a.m. and 12 p.m. and 2 p.m. and 6 p.m. Kids below the age 3 years of are not allowed into the ashram. Photography is allowed but only with authorization of the ashram authorities. Some of the ashram’s facilities like the library and the Main Building can be accessed, after obtaining a gate pass from the Bureau Central or some of the Ashram Guest Houses. It is located on Rue De La Marine.

While it is possible to enter the main Ashram building freely during visiting hours, some sections of the Ashram entail a pass to enter. If visitors get accommodation in any of the Ashram Guest Houses, they’ll be given the appropriate passes. However, for visitors not staying at an Ashram guest house, the Bureau Central can help by providing information and pass.

The Bureau Central office, designed as an exhibition hall, provides an introduction to the vision of Sri Aurobindo and The Mother and their means of spiritual practice, all the way through display of photographs, books, and videos.