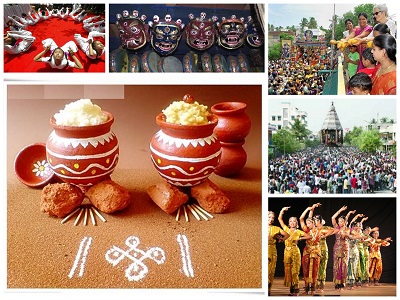 Moreover, the French populations that are an integral part of Puducherry contribute to the fact that a lot of international festivals are celebrated across the region as well. The union territory is also famous for a lot of local festivals, which include Sedal, Masi Magam, Karaikal Mangani thiruvizha and so on. Let's find out some of the most popular fairs and festivals of Puducherry.

Thai Pongal popularly referred as Pongal pandigai among the Tamils, is one among the most important festivals of the union territory of Puducherry. Thai Pongal is one of the longest festivals observed as the festivities last for four long days (usually between Jan 13 to Jan 16). The first day of the festival is referred as Bhogi pandigai which is observed based on a singular concept of burning worthless and old items, welcoming new things and looking for a fresh start.

The concept of Bhogi pandigai could well be explained using the famous Tamil phrase "Pazhayana kazhithalum puthiyana pukuthalum". The succeeding day is celebrated as Pongal, the most significant day among the four days of Thai Pongal. The Pongal day is all about rangolis, sweet pongal, ven pongal and thanking the suryabhagavan (Sun God). The following day is observed as the Maatu pongal where cattle which play a crucial role in agriculture are felicitated. The last day of Thai Pongal is referred as Kaanum pongal is all about family reunions.

One of the unique festivals celebrated in the Union territory of Puducherry include International Yoga Festival. This festival is celebrated from 4th of January until 7th every year to encourage and promote the art of yoga and the philosophies of yoga. Plenty of yoga gurus all over the world gather in Puducherry during this time of the year and conduct shows, discussions, talks by way of Indian classical music and dance performances. They exchange thoughts, philosophies with one another and promote yoga to the normal people who can follow these in their normal walks of life.

Police parade in the Indira Gandhi Stadium during the Republic day celebrations of Puducherry is an awe-inspiring sight to look at. Pondicherrians celebrate the Republic Day in a devoted manner and share their patriotic excitations with fellow citizens. The Chief Secretariat, entire beach road and Raj Nivas are illuminated attractively to mark the celebrations.

Yet another singular festival observed in Puducherry is the Mask festival also known as Mascarade festival. It is celebrated during March - April month of the year. This festival reflects the French tradition followed by the people of Puducherry. This fete is glorified with people wearing masks, fancy costumes, merrymakers, which feel like Halloween of Puducherry. Wearing all the masks, people go for a round in the neighborhood enjoying merrily and dancing to the music played.

Maasi magam widely celebrated in the state of Tamilnadu, is as well observed in Puducherry. It is celebrated in the place of Kurichikuppam, which is situated in the north of the Union territory during February - March month. The fishermen of the area gather with deities from 38 different temples that run as a procession accompanied by nadaswaram and other traditional instruments. The maasi magam is celebrated on a full moon day where people gather on the seashore and take a holy dip and offer their prayers to deity.

The Villianur Temple car festival is celebrated in Sri Gokilambal Thirukameswara temple at Villianur, which is 10km from Puducherry. It is a ten-day festival celebrated annually like Brahmotsavam during the period of May - June. The 9th-day celebrations are marked by temple car or chariot taken out for a procession by a group of devotees, which stands as a remarkable sight.

On 14 July every year, Bastille Day, Puducherry witnesses an Indo-French spectacular ceremony. We can see uniformed war veterans marching in the street of Puducherry singing 'Marsellaise'. Getting a glimpse of French flag alongside Indian flag outside the houses of Pondicherrians is a unusual scene to look at.

Sri Aurobindo Birth anniversary is thoroughly celebrated by people of Puducherry every year on 15th August. This coincides with the Independence Day of the country, and people give importance to both on this day. Devotees reach to Sri Aurobindo Ashram and pay homage and offer prayers to the distinguished soul.

Yet another popular festival of Puducherry, a cultural pageant, Fete de Pondicherry coincides with the Liberation Day and the Independence Day of India. On this day, Park Monument aka Aayi Mandapam is decorated and illuminated, which makes it a terrific sight for visitors and spectators.

Explore more about Culture of Puducherry