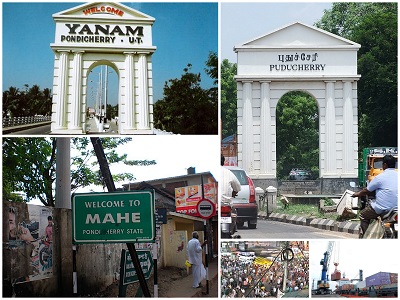 The urban centre of Puducherry, widely regarded as India's little France is assorted as a union territory of India.

Puducherry is far-famed especially among the travelers for its French links, long stretches of beautiful beaches, spiritual ambiance, salubrious atmospheric condition, age old heritage structures and what not!

Puducherry will never cease to amaze the visitors with its singularity.

Puducherry has been divided into four divisions (districts) for administrative purposes

Among the four administrative divisions, the district of Pondicherry is the most prominent one as per the geographical area and population records. Now let's explore some of the important areas or localities of the union territory.

Lawspet, a significant sphere of Puducherry is a thickly settled area. It is a very classy locality and more importantly the Puducherry Airport is located in Lawspet, and the aerodrome is in the phase of extension. Lawspet area started developing from the year 1990 with many government official buildings and private building mushrooming all over the locality. Another significance of Lawspet is that it is also an important assembly constituency in the Union territory of Puducherry.

The locality is illustrious for housing a lot of prestigious educational institutions like schools, polytechnic institution, Arts College which are both government owned and private owned and thereby becoming an important educational hub of Puducherry. Some of the main areas of Lawspet include Shanthi Nagar, Mahaveer Nagar, Nehru Ville Nagar, Airport Road, College Road, Rajaji Nagar, Pudupet and Beasant Nagar. Other than the numerous educational institutions, the area of Lawspet also hosts a mosque in the airport road, many temples in Kurinji Nagar and a Church in Don Bosco school campus.

The area of the Boulevard can be separated into two: Tamil and French towns. The classification is primarily done based on the settlement of people in the past. The Boulevard area is known for its styles of architecture that are depicted in both French towns and Tamil towns. The area has provided protective cover to Sri Aurobindo and Mahakavi Subramania Bharathi, who were a crucial part of the freedom struggle of India against the British rule.

The Boulevard proudly exhibits assorted styles of architecture, which include traditional and modern Tamil buildings; Franco-Tamil houses many other French colonial structures. The famous French colonial structures are simply astonishing that large verandahs, massive windowpanes, sky-high ceilings, airy halls and other architectural brilliance will amaze you in no time! Some of the important roads and areas near the Boulevard in Puducherry include Bussy Street, White town, MG road, Netaji Subhash Chandra Bose Salai, Victor Simonel Street, Lal Bahadur Shastri road and so on.

Whether you are a tourist or a local, Puducherry cannot be explored without visiting the top commercial areas like Romain Rolland street, Mahatma Gandhi road (MG road), Anna salai, Cathedral street aka mission street, Jawaharlal Nehru street and so on. 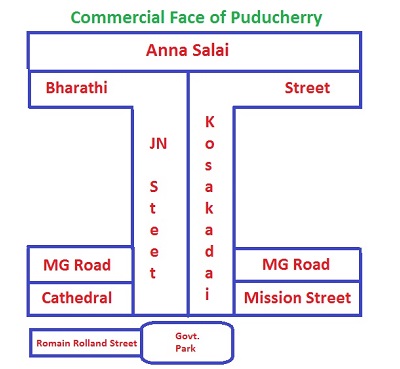 The commercial face of Puducherry comes alive as early as 08:00 am in the morning on a daily basis. The commercial roads get to meet thousands of shoppers, visitors, international travelers and many other kinds of people from different walks of life. The shopping base of Puducherry bustles throughout the day before shutting its tired eyes everyday around 11:00 pm in the night!


Other important areas or localities of Puducherry include