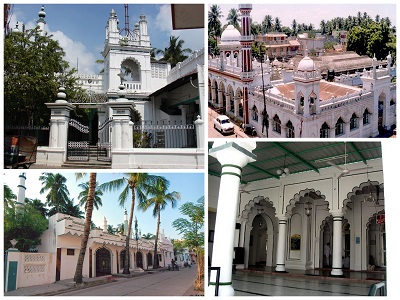 The medieval period of time of Pondicherry witnessed the reign of the powerful Muslim rulers for a short time. The Islamic domination outspread all over India and they constituted their central office in the southern city of Madurai, Tamil Nadu. The succeeding years marked the declination of Muslim rulers where the Vijayanagar Empire brought the whole of South India, including Pondicherry under their command. Owing to the fact that the union territory of Puducherry was under the Muslim rulers, a lot of mosques were constructed that reflects the awe-inspiring design patterns, architectural brilliance, art and culture of the yesteryear Pondicherry. Let's find out some of the notable mosques in Puducherry along with their location details.

The French invaded the region and branded the neighborhood of the Khutbha Mosque as a White area. Subsequently, a decree was published to displace the shrine and the whole Muslim community from the area. The shrine was resettled in a new place, and it was constructed in a way that it faces the Mecca (the holiest city of Islam). The Muslim shrine is also the home of the Darga of Moulla Saiubu and frequent prayer sessions are organized.

One among the most significant spiritual address of Muslims in the union territory of Puducherry is the Meeran masjid. Constructed almost 350 years ago, the Meeran masjid is one of the oldest masjids in the region. The architectural pattern of the Muslim shrine is pretty popular among the local population for its singular designs and structures.

Constructed by the Arcot Nawabs, the design of the Meeran masjid displays a medieval Muslim flair. The domical structure of the Meeran Mosue is held by four majestic columns and the bronzy kallasas in the upper side of the frontal minaret brings more beauty to the mosque. Regular prayers are organized in the Meeran Mosque and large number of people visits the mosque throughout the year.

Though, the Mulla Mohammad masjid is a part of Khuthbha Mosque, it still features an individual building structure and administrative system for its own. The Mulla Mohammad Mosque houses a hall for cooking, a modest pool with fishes and a hall for Jenesha.