The Pondicherry museums also have a display of the various means of transport used in the early period of the colonial rule in Pondicherry. Many articles and souvenirs preserved in the Puducherry museums uncover the preponderance of business deals took place in the area since the beginning of the Common Era. The Pondicherry museums also feature assorted conveyances used during the colonial rule in the country. The museums in Puducherry are informatory and unveil the rich and ancient refinement and tradition of the region. Let's find out some of the popular and must-visit museums of Puducherry along with much other useful information.

The celebrated Puducherry Museum located in the bustling neighborhood of St Louis Street is one among the most popular museums in the region. The museum is presently located in a building that was popularly called as the Law Building. The Puducherry Museum is simply a depot of articles and objects that belong to the Tamil dynasties and are not widely known; especially appreciated for the uncommonness. 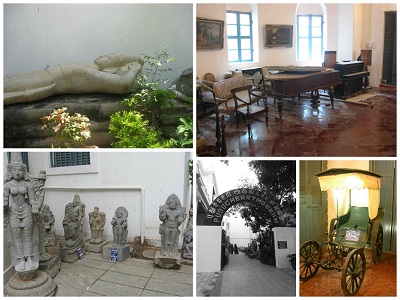 The court of the Puducherry museum maintains the ossified boles (main stem of a tree; generally embraced with bark; the bole is typically the part that is commercially useful for lumber). A lot of stone carved sculptures are also kept in display along the vestibule of the museum. he ground level of the Puducherry museum presents the earliest means of transportation utilized in the region. The highlights of this museum are the souvenirs dug up from Arikamedu (archaeological land site in Kakkayanthope, Puducherry). The museum also houses a geologic division that displays an amazing collection of church keepsakes, handworks and antique coins. Furthermore, the Puducherry museum houses an exclusive division for fossils (remains of a plant or animal that existed in a past geological age, and that has been dug up from the ground).

Approximate Time Taken for the Visit: 2 to 3 hours

Nearby Places to Visit:

Bharati memorial museum, officially known as Bharathiar Memorial Museum and Research Centre and Bharatidasan Memorial Museum, both the museums were opened to memorialize the two greatest Tamil poets the world has ever seen. The present-day museums were once the official abode of Mahakavi Subramania Bharathiyar and Bharathidasan. 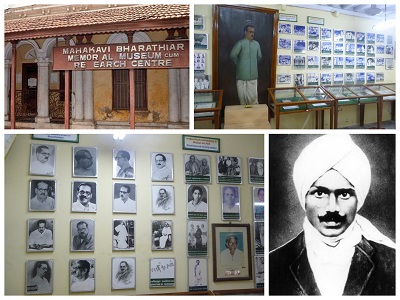 Bharathiyar, proudly called as Mahakavi (literally called the supreme poet in Tamil) came to Pondicherry during the year 1908 as a fugitive, escaping from the unkind British rulers of India. Pondicherry, being a French colony, the supreme poet preferred the land as it had its own set of administrators and constabularies that are no way related to the British. Thanks to the mighty British that some of the best works of Mahakavi came out of this very house, which stands firm even today as his memorial museum. In addition, the memorial museum of Bharati houses over 17,000 scripts, handwritten books and rarest of rare photos.

Both Bharati and Bharatidasan Memorial Museums were organized to honor these greatest Tamil poets, and the objects and items maintained here is an instance of prosperous era of Tamil literature.

Approximate Time Taken for the Visit: 3 to 5 hours

The illustrious Jawahar Toy Museum is a dream destination for children who love to bask catching the beautified and embellished dolls and toys. The museum is regarded as one of the most singular museum concepts in India to have come up with the delighting exhibits of toys and toys only! 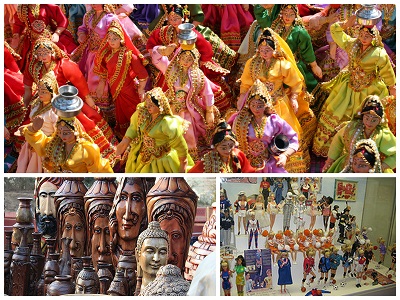 As a matter of fact, Jawahar museum houses almost 150 dollies that are amazingly beautified. The dolls display the culture and tradition of a lot of countries, including our very own Indian style of costumes. The decorations of the dolls simply depict the brilliance in art. The Jawahar Toy Museum educates the kids who visit this museum in packs about the value of unity in diversity that is widely practiced in our country.

Approximate Time Taken for the Visit: 2 to 3 hours
Entry Fee: None

Ananda Ranga Pillai who was widely known as Samuel Pepys of French India was the official dubash (interpreter) of Dupleix, the governor of Puducherry. The Ananda Ranga Pillai Museum situated in the Anantarangam Pillai Street, Pondicherry is a storage of the uncommon compiling of journals that gives complete information on the 18th-century French India.