The union territory of Puducherry, fondly called as Puduvai or Pondy is a significant urban centre located just 152 km away from the southern metropolitan city of Chennai. Once a French colony in India, Puducherry has come a long way from a tiny fishing village to an authoritative port city of South India. The union territory of Puducherry is a distinctive urban centre that is going through rapid development in assorted spheres on a daily basis. The region has progressively made headway to a cosmopolitan with its long list of growth elements, which include manufacturing plants, giant industries, information technology, healthcare facilities, and educational institutions and so on. 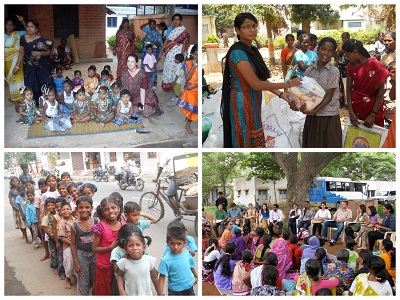 The population of Puducherry comprises a relatively large share of migrants as the urban city extends employment opportunities to thousands from all over the country. The phase at which the union territory is progressing and various factors that make the Puducherry a singular place is just one side of the coin. The other side of the territory is totally different that it is all about the hapless, impoverished and unfortunate people. The union territory of Puducherry is a city that values humanity as the region is the home of a lot of charitable societies, non government organizations, public trusts and many other arrangements for the welfare of people who are in need of help.

As an integral part of the society, every citizen has the responsibility of dedicating whatever he/she can do for the welfare of the society preserving human values above everything else. Nevertheless, today people do not even have time to spend with their own family and expecting them to work for the society would not be fair! Charitable societies, public trusts, non government organizations in the union territory of Puducherry are nothing but arrangements or administrations that work for the society for assorted causes. Some of the noble causes include animal welfare, environmental welfare, welfare of senior citizens, foundations for education, orphan, physically and mentally challenged, women in distress and so on.

Anbalayam was established in the union territory of Puducherry with a noble objective of providing social and economic identity to rural and hapless women community. The charitable society of Anbalayam is presently working on various intentions which include creating awareness on moral and economic concerns, facilitating the hapless women to utilize the social welfare schemes, training the rural women about money saving, coaching the rural women in small scale trade, providing unconditional care and support to women who are in need of help and many other worthy causes.

Some of the most successful programs and schemes launched by the Anbalayam society include seminars and medical extension, women wellbeing activities like hostel for women, vocational trainings and skill development programs, child wellbeing activities like sponsorship for education, education for tribal children, children's society and enterpriser development platform and so on.

Animation development employment and communication network, shortly called as ADECOM Network is a charitable society that primarily works with a distinguished intention of educating women about their rights and providing categorical support. ADECOM attends to Dalit women in providing various ideas about their rights, creating self awareness and self confidence, promoting social and environmental development, providing work opportunities to Dalit people, advancing communication and partnership and so on.

Some of the welfare programs and schemes introduced by the Animation development employment and communication network in Puducherry include Kootu-k-kural, women development programs like Puduvai Pengal Pagutharivu Iyyakkam, modern initiatives and welfare schemes, Kuzhandhaigal Kootharangam and many other welfare schemes.